In February last year, Evan You released Vite 2. Since then, its adoption has grown non-stop, reaching more than 1 million npm downloads per week. A sprawling ecosystem rapidly formed after the release. Vite is powering a renewed innovation race in Web frameworks. Nuxt 3 uses Vite by default. SvelteKit, Astro, Hydrogen, and SolidStart are all built with Vite. Laravel has now decided to use Vite by default. Vite Ruby shows how Vite can improve Rails DX. Vitest is making strides as a Vite-native alternative to Jest. Vite is behind Cypress and Playwright's new Component Testing features, Storybook has Vite as an official builder. And the list goes on. Maintainers from most of these projects got involved in improving the Vite core itself, working closely with the Vite team and other contributors. 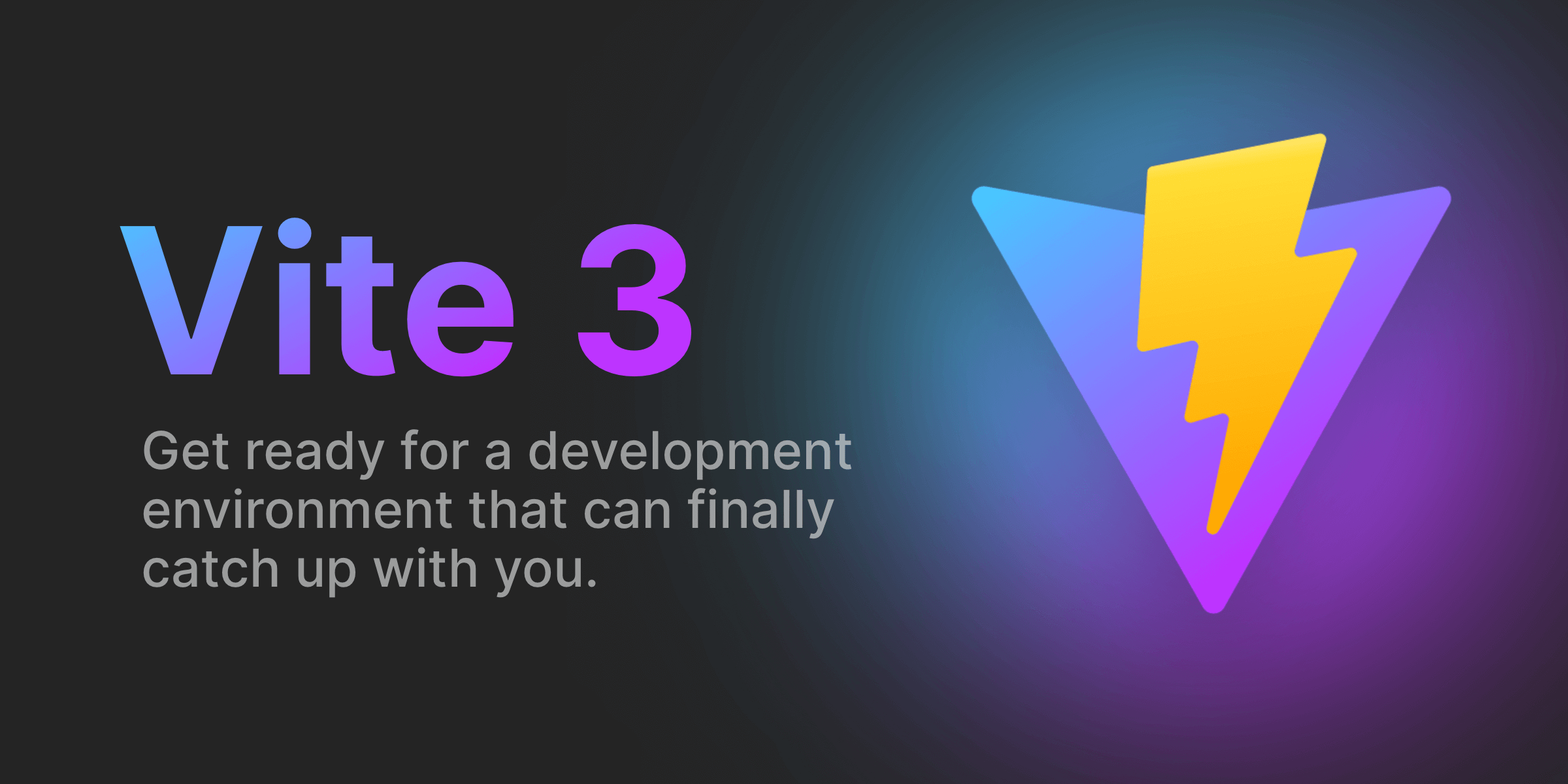 Today, 16 months from the v2 launch we are happy to announce the release of Vite 3. We decided to release a new Vite major at least every year to align with Node.js's EOL, and take the opportunity to review Vite's API regularly with a short migration path for projects in the ecosystem.

If you are new to Vite, we recommend reading the Why Vite Guide. Then check out the Getting Started and Features guide to see what Vite provides out of the box. As usual, contributions are welcome at GitHub. More than 600 collaborators have helped improve Vite so far. Follow the updates on Twitter, or join discussions with other Vite users on our Discord chat server.

Go to vitejs.dev to enjoy the new v3 docs. Vite is now using the new VitePress default theme, with a stunning dark mode between other features.

Several projects in the ecosystem have already migrated to it (see Vitest, vite-plugin-pwa, and VitePress itself).

If you need to access the Vite 2 docs, they will remain online at v2.vitejs.dev. There is also a new main.vitejs.dev subdomain, where each commit to Vite’s main branch is auto deployed. This is useful when testing beta versions or contributing to the core’s development.

There is also now an official Spanish translation, that has been added to the previous Chinese and Japanese translations:

create-vite templates have been a great tool to quickly test Vite with your favorite framework. In Vite 3, all of the templates got a new theme in line with the new docs. Open them online and start playing with Vite 3 now:

The theme is now shared by all templates. This should help better convey the scope for these starters as minimal templates to get started with Vite. For more complete solutions including linting, testing setup, and other features, there are official Vite-powered templates for some frameworks like create-vue and create-svelte. There is a community-maintained list of templates at Awesome Vite.

Apart from the CLI’s aesthetics improvements, you’ll notice that the default dev server port is now 5173 and the preview server listening at 4173. This change ensures Vite will avoid collisions with other tools.

One of the pain points of Vite 2 was configuring the server when running behind a proxy. Vite 3 changes the default connection scheme so it works out of the box in most scenarios. All these setups are now tested as part of the Vite Ecosystem CI through vite-setup-catalogue.

import.meta.glob support was rewritten. Read about the new features in the Glob Import Guide:

Multiple Patterns can be passed as an array

Negative Patterns are now supported (prefixed with !) to ignore some specific files

Named Imports can be specified to improve tree-shaking

Custom Queries can be passed to attach metadata

Eager Imports is now passed as a flag

The WebAssembly import API has been revised to avoid collisions with future standards and to make it more flexible:

Learn more in the WebAssembly guide

Most SSR frameworks in the ecosystem were already using ESM builds. So, Vite 3 makes ESM the default format for SSR builds. This allows us to streamline previous SSR externalization heuristics, externalizing dependencies by default.

Vite 3 now properly supports relative base (using base: ''), allowing built assets to be deployed to different bases without re-building. This is useful when the base isn't known at build time, for example when deploying to content-addressable networks like IPFS.

There are other deploy scenarios where this isn't enough. For example, if the generated hashed assets need to be deployed to a different CDN from the public files, then finer-grained control is required over path generation at build time. Vite 3 provides an experimental API to modify the built file paths. Check Build Advanced Base Options for more information.

One of the main differences between dev and build time is how Vite handles dependencies. During build time, @rollup/plugin-commonjs is used to allow importing CJS only dependencies (like React). When using the dev server, esbuild is used instead to pre-bundle and optimize dependencies, and an inline interop scheme is applied while transforming user code importing CJS deps. During the development of Vite 3, we introduced the changes needed to also allow the use of esbuild to optimize dependencies during build time. @rollup/plugin-commonjs can then be avoided, making dev and build time work in the same way.

Given that Rollup v3 will be out in the next months, and we're going to follow up with another Vite major, we've decided to make this mode optional to reduce v3 scope and give Vite and the ecosystem more time to work out possible issues with the new CJS interop approach during build time. Frameworks may switch to using esbuild deps optimization during build time by default at their own pace before Vite 4.

There is opt-in support for HMR Partial Accept. This feature could unlock finer-grained HMR for framework components that export several bindings in the same module. You can learn more at the discussion for this proposal.

Vite cares about its publish and install footprint; a fast installation of a new app is a feature. Vite bundles most of its dependencies and tries to use modern lightweight alternatives where possible. Continuing with this ongoing goal, Vite 3 publish size is 30% smaller than v2.

In part, this reduction was possible by making some dependencies that most users weren't needing optional. First, Terser is no longer installed by default. This dependency was no longer needed since we already made esbuild the default minifier for both JS and CSS in Vite 2. If you use build.minify: 'terser', you'll need to install it (npm add -D terser). We also moved node-forge out of the monorepo, implementing support for automatic https certificate generation as a new plugin: @vitejs/plugin-basic-ssl. Since this feature only creates untrusted certificates that are not added to the local store, it didn't justify the added size.

A triaging marathon was spearheaded by @bluwyoo, @sapphi_red, that recently joined the Vite team. During the past three months, the Vite open issues were reduced from 770 to 400. And this dive was achieved while the newly open PRs were at an all-time high. At the same time, @haoqunjiang had also curated a comprehensive overview of Vite issues. 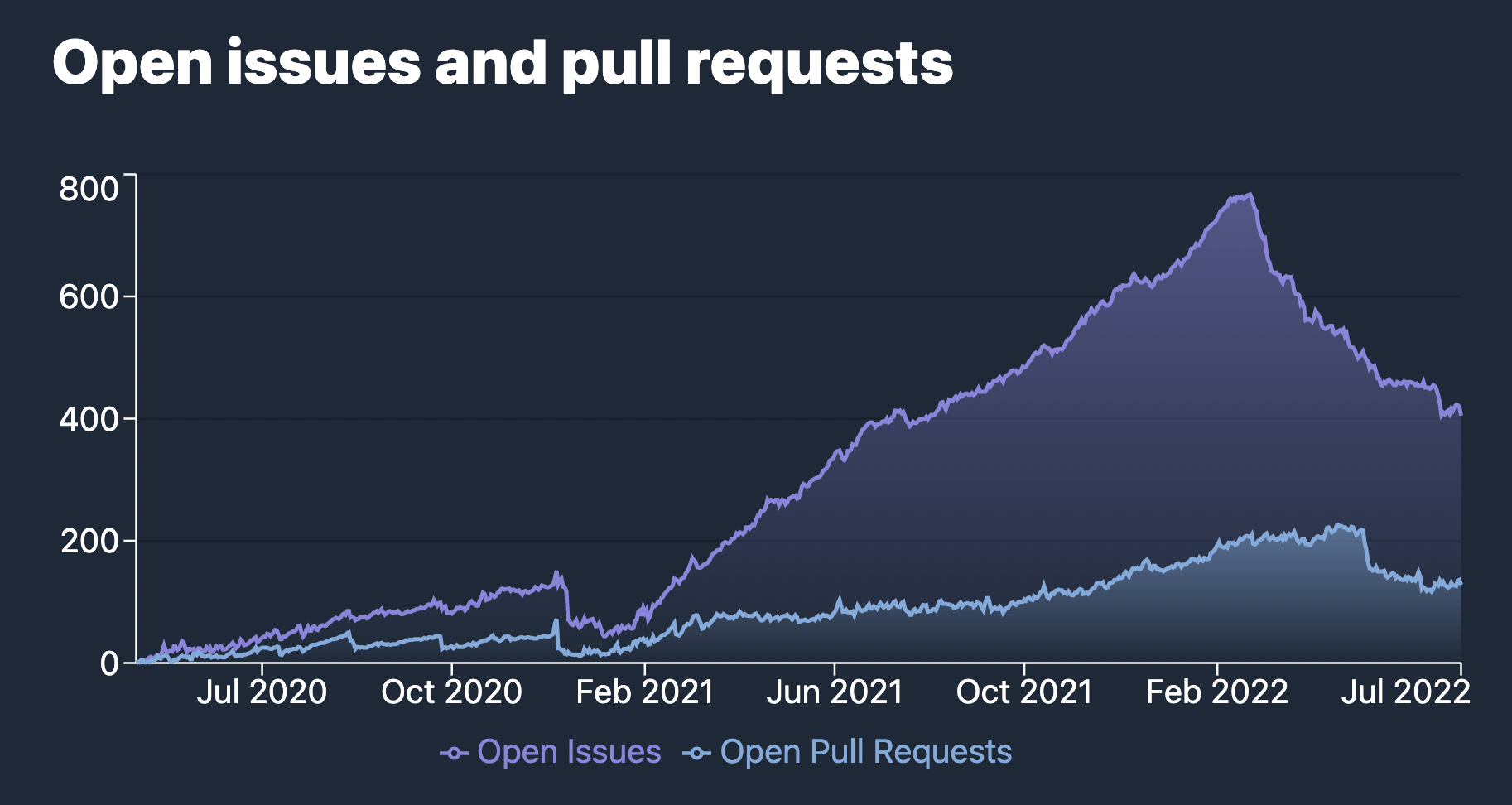 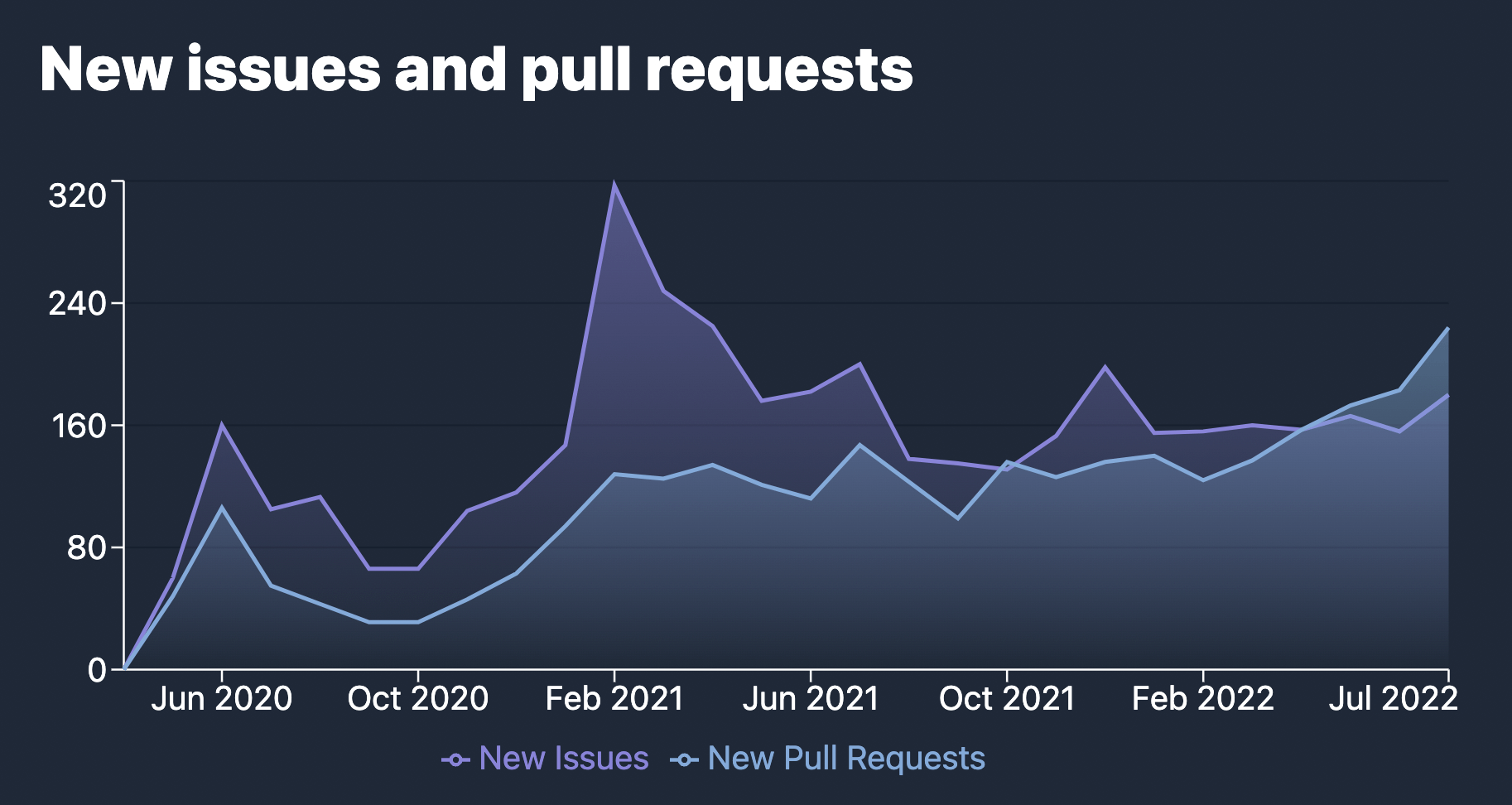 Learn more in the Migration Guide.

While working towards Vite 3, we also improved the contributing experience for collaborators to Vite Core.

The Ecosystem is Ready for v3 #

We have worked closely with projects in the ecosystem to ensure that frameworks powered by Vite are ready for Vite 3. vite-ecosystem-ci allows us to run the CI's from the leading players in the ecosystem against Vite's main branch and receive timely reports before introducing a regression. Today's release should soon be compatible with most projects using Vite.

Vite 3 is the result of the aggregate effort of members of the Vite Team working together with ecosystem project maintainers and other collaborators to Vite core.

We want to thank everyone that have implemented features, and fixes, given feedback, and have been involved in Vite 3:

We also want to thank individuals and companies sponsoring the Vite team, and companies investing in Vite development: some of @antfu7's work on Vite and the ecosystem is part of his job at Nuxt Labs, and StackBlitz hired @patak_dev to work full time on Vite.

We'll take the following months to ensure a smooth transition for all the projects built on top of Vite. So the first minors will be focused on continuing our triaging efforts with a focus on newly opened issues.

The Rollup team is working on its next major, to be released in the following months. Once the Rollup plugins ecosystem has time to update, we'll follow up with a new Vite major. This will give us another opportunity to introduce more significant changes this year, which we could take to stabilize some of the experimental features introduced in this release.

If you are interested in helping improve Vite, the best way to get on board is to help with triaging issues. Join our Discord and look for the #contributing channel. Or get involved in our #docs, #help others, or create plugins. We are just getting started. There are many open ideas to keep improving Vite's DX.